Crypto exchange Coinbase has announced that its NFT marketplace is in the beta stage. It is currently accessible to only a few beta testers who will get an invite based on their position on the waitlist.

At this moment, the crypto firm is looking to make its mark in this space by competing with established firms by adding social features such as a comment system and an algorithmic feed.

What can we expect from Coinbase’s NFT marketplace?

Prima facie, some of the screenshots shared by Coinbase in its blog post are a mix between Instagram and OpenSea.

OpenSea is one of the biggest NFT marketplaces in the world right now.

The Coinbase marketplace includes profiles wherein users can showcase their collections along with a discover feed. The discover feed in the marketplace will recommend NFTs to users based on their past purchases, trending commodities, and whom they are following.

Besides, the marketplace is also expected to support liking or favoriting NFTs similar to OpenSea and other marketplaces.

There is a “Shop” tab that beta testers can use to purchase their desired NFTs. Currently, the Coinbase marketplace only supports the Ethereum (ETH) blockchain. In addition, Beta users log in by using a wallet similar to the one Coinbase offers.

Although Coinbase has said that it will support Mastercard in the future, prices are only listed in ETH at the moment.

Is Coinbase late to the NFT party? 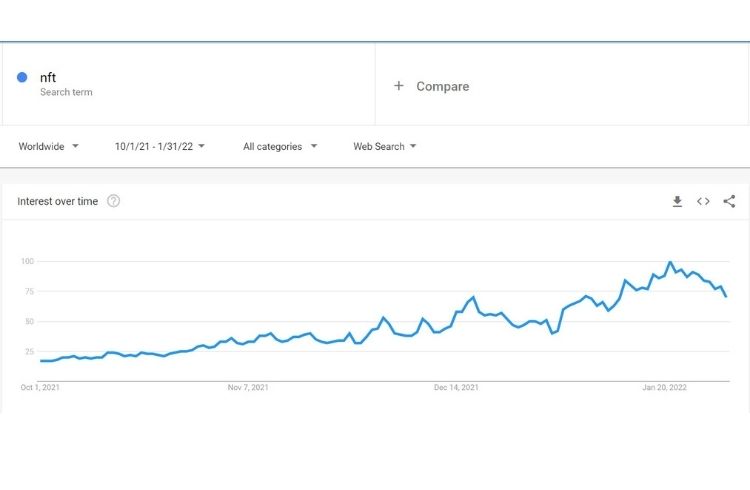 Coinbase has been around in the crypto exchange market for a while now. However, it seems like it is late for the NFT party.

Bloomberg has pointed out that the NFT market has slowed down in recent weeks, and the current developments back this up.

For example, DappRadar’s NFT marketplace tracker highlights that the number of traders and volume of trades on top marketplaces has decreased in the past month.

In addition, OpenSea, which is the largest NFT market has also witnessed a 67% dip in trade volume in April in comparison to that in March.

However, interest in NFT is not dying down as search interest has increased between October 2021 and January 2022.

Coinbase announced the NFT marketplace in October. It said that there are a bunch of exciting features that are not part of the current beta.

Minting NFTs on other blockchain platforms along with the ability to purchase tokens with a Coinbase account and credit card are in the pipeline.

Right now, the beta is not accessible to everyone and it could take a while before all Coinbase users have access to it.

We will be happy to hear your thoughts

from $20/month
Get Free Trial

from $38/month
Get Free Trial

from $5/month
Get Free Trial