Over the past few hours, Microsoft users from around the world have reported issues with creating and viewing emails. Microsoft has confirmed that Microsoft 365 and Outlook are facing an issue where the text of an email is unusually disappearing from the display while being typed.

There have also been multiple reports from Outlook users of receiving emails with no content in the body. The issue surfaced after Microsoft released an updated Microsoft 365 version last week.

SEE ALSO: Microsoft in Early Talks to Buy Discord for over $10 Billion

After the Microsoft Outlook bug was reported by millions of users worldwide, Microsoft has stated that it is trying to find a solution. As per the latest update from the software giant, the solution should be available by around 9 PM Pacific time on Tuesday, May 11. 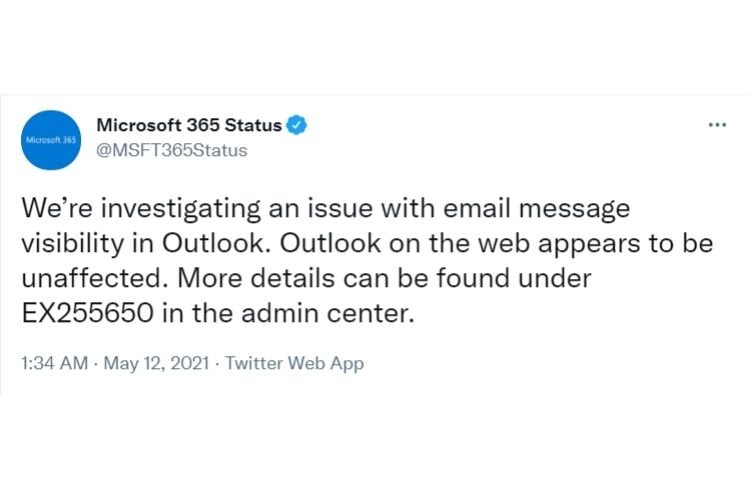 The vendor tweeted to say that the company is currently investigating the email visibility issue. It also mentioned that Outlook on the mobile and web is unaffected and can be used as a temporary alternative for the time being.

The computer giant said that users would be required to restart Outlook to resolve the ongoing issue once the fix is rolled out. Further, in some cases, users might have to restart the client a second time to see the changes.

Millions of Microsoft users have taken to social media to voice their anger at the issue. A lot of users are concerned about the impact of this blip on their work schedules.

Applications such as Microsoft Outlook are packed with a bunch of communication tools. Disruption in the services of any one of the tools could affect the working order and lead to undesired consequences.

Microsoft issued another update stating that it is on track to fix the problem in the hours to come.

How Can You Fix Microsoft Outlook Bug?

Users can either wait for Microsoft to roll out a solution or roll back to the previous Microsoft Outlook version.

from $19/month
Get Free Trial